« Assange … a right to scrutinise the state.
Noted in passing »

An ‘abiding distrust’ for anonymous speech 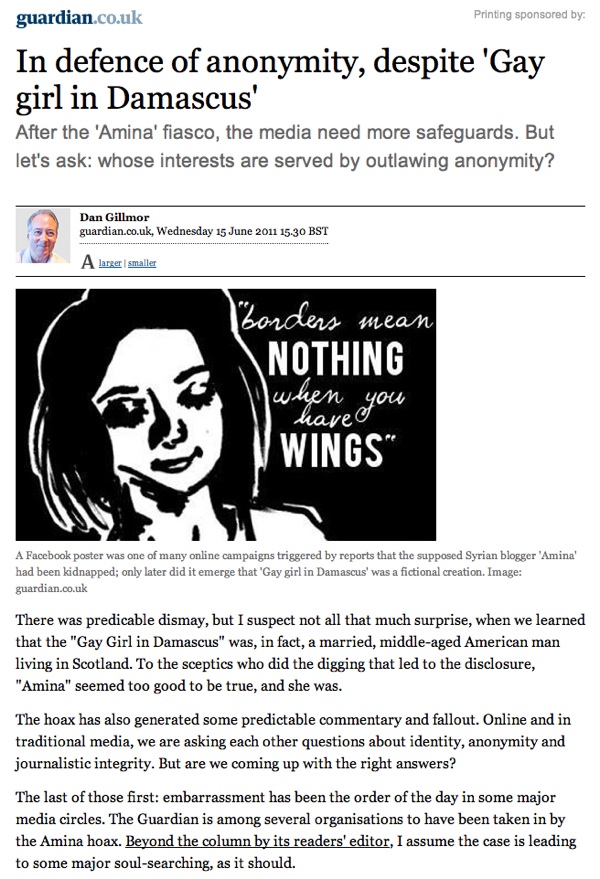 Sounding real is not the same as being real. The fake Amina’s blog was especially well done, with details that sounded authentic even to native Syrians. Its unmasked author said he was telling larger truths, but we have a name for this technique: fiction.

We also have a name for the technique of identity in this case: pseudonym. This is a much-used method online – not revealing one’s own name but having a consistent identifier. It’s one step away from outright anonymity, where there is no accountability whatever. As I wrote last week, the lack of accountability in such cases puts more responsibility on the audience. It is up to us to cultivate an abiding distrust for speech when the speaker refuses to stand behind his or her own words – that is, by using one’s own name.

We should temper that scepticism, however, with the recognition that in places like Syria, where vicious dictators are ordering wholesale killings of dissidents and rebels, standing directly behind one’s own words can be literally life-threatening.

My own view is just as conflicted as Gillmor’s. I see a need for protection from reprisal and retribution for whistle blowers and ‘inconvenient truth-tellers’. Especially — and most of us have NO IDEA what it’s really like — if they live under a repressive, totalitarian regime that doesn’t brook dissidence …

But Tom MacMaster’s hoax, pretending to be a lesbian blogger (the irony that the editor of the lesbian discussion forum he frequented turned out to be another man pretending to be lesbian) shows up the effectiveness of deceit.

Despite the self-congratulatory glow that some of my Twitter pals seem to be feeling, a lot of good people were taken in, and the road just got harder for the real McCoy bloggers etc… credibility and safety are tied together.

So, we need to engage what Gillmor called ‘an abiding distrust’ for speech when the speaker refuses to stand behind his or her own words, in their own name.

That’s how I see it.

But it depends what they are saying, of course. Depends on their claims. Hyperbole is another warning sign, in my view.