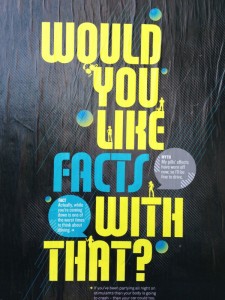 I spotted this poster on a wall near my office in Epsom (John Banks country) and it reminded me of a time long ago in the omigod 1980s when I ran a street theatre company with a group of Christian friends. I wrote our scripts and acted in or narrated many of them.

‘Wholemeal Theatre Company’ our sandwich board said — and, being windy Wellington, that board was made of the heaviest wood we could manage … so it didn’t blow down Cuba Mall and clonk an innocent passerby mid-performance. In tone we were all very Python-esque, people said (I loved Monty Python, still do, and aimed for a Not the Nine O’Clock News, Alas Smith and Jones feel) … it seemed well-received and we loved doing it.

Through that street theatre group I was lucky enough to participate in an acrobatics workshop (really challenging!) with some friends and dancers from the Royal NZ Ballet … but that’s another story.

Anyway, one day after a lunchtime street show I was approached by someone from ALAC — then the Alcohol Liquor Advisory Council — and, long story short, we were commissioned by them to do a series of pointed comedy sketches and performances on the topic of why/how misuse of booze can be dangerous. We were happy to do it. Good times.

From the look of this poster, whoever is running alcohol/drug education these days is still going for a quirky approach.

Do you have ‘an addictive personality’? Welcome to the human race!

From my point of view the ‘social problem’ caused by alcohol abuse is not usually about the particular substance — human societies all around the world have found ways to create alcohol — from malt & hops to wine made with grapes or plums or pears to sake to cane liquor and whisky, vodka and moonshine.

In fact, history shows we’re very good at finding all sorts of substances to abuse on our way to reaching an ‘altered state’. A school friend of mine was so desperate for a ‘high’ he ingested drugs designed to save dogs who had swallowed 1080 poison.

For me, what I notice is that it’s not about the means, (the ‘drug of choice’) it’s about our natural(?) propensity to become ensnared in something to which we become destructively addicted — that’s the trap our novelty-seeking brains fall into. We seem to be wired for it.

Something with addictive qualities can have a pretty low threshold, too, as we’ve discussed before prompted by Merlin Mann’s wonderful ‘Better’ essay.

Addiction, by definition, gets its hooks into us … sometimes catastrophically. It sometimes encompasses a kind of gluttony — beyond the conditioning effect which sees us impelled by a greater and greater need for a ‘fix’.

Appetite makes us consume more than we ‘need’ … even when such consumption is detrimental (understatement alert) to our own well-being and that of our loved ones.

That said, I remember a guest lecturer in my psychology class at Victoria explaining how, in their work with alcoholics, they learned their clients’ tolerance to alcohol built up to the point where they would pass any sobriety test they encountered — even though they’d consumed enough alcohol to slide a ‘normal’ drinker under the table. The only way to truly know whether these hardened addicts were off the wagon was a blood test.