« Why would you NOT use AdBlock?
Visiting hours »

A strong religious faith and a strong desire for liberty

28th June 1963: President John F Kennedy of the USA is almost lost among a crowd of well-wishers during his visit to Cork in Ireland. (Photo by Keystone/Getty Images)

One of my regular pleasures is a BBC podcast called Witness. I recommend it. Details here.

This morning I listened to the episode ‘JFK in Ireland’. And, as often happens, a passage of his words jumped out at me:

When my great-grandfather left here to become a cooper in East Boston, he carried nothing with him except two things: a strong religious faith and a strong desire for liberty. And I’m glad to say that all of his great-grandchildren have valued that inheritance.
— John F Kennedy speaking at New Ross, Ireland June 1963

Apart from all the good-to-be-home bonhomie, John Kennedy also had something very deliberate to say to the Irish about their preponderance for censorship, relating it superficially to James Joyce, but addressing an issue that could be said to be linked, somehow, to Irish Catholic heritage.

John F Kennedy is a worldwide icon, whatever his flaws and past indiscretions. As disclosed here before, he and his brothers are heroes of mine. Their focus on social justice, civil liberties, equality of individuals — and their inspirational courage — have always seemed to me, at least, to be indivisible from their Catholic faith.

Few are willing to brave the disapproval of their fellows, the censure of their colleagues, the wrath of their society. Moral courage is a rarer commodity than bravery in battle or great intelligence. Yet it is the one essential, vital quality for those who seek to change a world that yields most painfully to change.

These words are deeply, deeply meaningful to me. (Please, no clumsy attempts at iconoclasm here.) 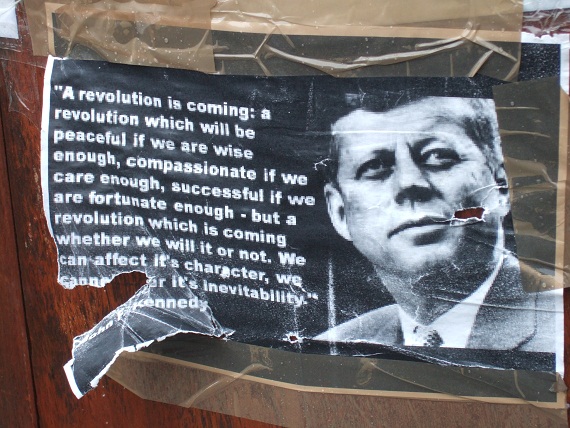 Apostrophe abuse aside, this poster, from a 2011 Occupy protest, demonstrates the influence of John F Kennedy’s words, almost 50 years after his death. (pic: martinnangle.blogspot.com – click)